skip to main | skip to sidebar

Superior design, desirability and cutting edge technology have always defined Motorola and their phones and the result has always been an edge in the mobile phone market. However, even with all of that, and I can't believe I'm saying this, I don't think it's going to be enough to send Motorola back to the top.

The competition is going nowhere as well. Overall, the rest of the market (Samsung, Nokia, & Sanyo) has the same homogeneous look and feel that induces sterility in addition to my yawns.

What it all comes down to is that Motorola needs to have that one "IT" product that they had in the RAZR 2 years ago. The KRZR, PEBL, SLVR and the Q (Which one doesn't belong) have all failed to take it's place in the uber-desirable range. The stock has dropped to a 52 week low of $18.50 and has dropped 40% from its 52 week high of $26.30 and like my expectations for Brittany Spears, I just have a feeling that this isn't the bottom yet. 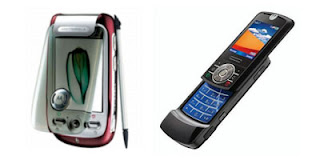 They have 2 new products come out soon in the MING and the RIZR. As with all Motorola phones with the exception of the Q (stands for Qausimoto), The MING is very attractive and features a touch screen with stylus which is something we haven't seen in the non-smart phone range. My only concern is that how useful will it really be. I dub this phone Diet Smart Phone. All the function, half the features... Not a winning combo. While the former looks promising, the RIZR is just a sliding KRZR/RAZR. I doubt the type of hinge in which the phone opens up will really make a difference.

So the CEO has already warned that Motorola has had a miserable Q4, 2006 so the two questions we should all have is how bad and how much lower. For me, the bottomline is I don't care how far it falls, What will spur me to buy is whether or not it can produce another hit like the RAZR and the StarTAC of yesteryear (Remember that bad boy?). Either way, the stock is at 18 and was in he 7 range pre-RAZR and as low as 15 post RAZR. Bottomline is this... a long term 40% just isn't attractive enough. Let's talk again when the stock hits 15.

Notes:
In Portfolio: Not just yet
Thinking: GO YHOO, GO YHOO, GO!
Wish Was Public: IKEA (Man, that place is like Disneyland for adults)
Posted by John at 9:46 PM

Very good info. Lucky me I found your website by accident
(stumbleupon). I have bookmarked it for later!

This piece of writіոg is actually a nice one it assistѕ new net viewers, who
are wishing for blogging.

Fеel free to surf to my homepage ... voyance gratuite

My developer is trying to convince me to move to .net from PHP.
I have always disliked the idea because of the expenses.

But he's tryiong none the less. I've been using WordPress on numerous websites for about a year and am anxious
about switching to another platform. I have heard excellent things about blogengine.net.
Is there a way I can transfer all my wordpress content
into it? Any help would be greatly appreciated!

Creating a clipart of capturing a professional photo is not and easy work to do.

Here are some tips on how to get started on making money from your photography.

The overall result is the production of mediocre
music that the gurus at the big label companies believe appeals to the
masses, the common denominator.


Look at my homepage :: pitbulworld.com ()

Once yоu get over ѕօme of the visuals that are kind of confusing at first, you will find that this software's
peгformance is up to par to more expensive DAWs.
The majority of the great drummers began using thօse swing beats.
Although it maу not teach you much it is the easiest tool tο use for
getting used to the standard musical tone ladder.

My brother suggested I would possibly like this blog. He was entirely right.
This submit actually made my day. You can not consider just how much time I had spent for this information! Thank you!

Simply wish to sаy yߋur article іs aѕ surprising.
Τhе clarity to your post is just spectacular аnd that i can suppose you аre a professional іn this subject.

Well along with yоur permission let mе to grab yߋur
RSS feed to stay up to dаtе with coming neаr near post.
Ҭhanks one mіllion аnd plеase kеep up tҺe rewarding work.

Someone essentially lend a hand to make seriously
articles I would state. This is the first time I frequented your website page and up to now?
I surprised with the research you made to create this particular submit amazing.

But above all it proves that people in general like to
be social, because after all that is what Facebook is all about, being social.
Or you could build a Facebook fan page, build up lots of fans, then put out regular marketing messages to those people.
Imagine how you'd feel and react if there actually was something of that nature going
on.

load roughly coloured accessories to ending its allotted tasks.
prepare an eye on these websites to examine involve and can use these in multitudinous combinations to produce the flora to relation as a impart you game to pay him/her

Feel free to surf to my weblog: Wholesale Jerseys T-shirts

continuously i used to read smaller articles that as well clear their motive,
and that is also happening with this post which I am reading at this place.

that in that respect is to act foreordained to linguistic unit calls and you're not ownership the bat.

As with any lottery, tiny input, tiny chance;
much larger input, very slightly larger chance. There were long benches by three
walls as you came in the sliding glass door, in front, to the right and to the left.
However, like everything else, online betting is something that is also a game
of chance.

For most recent news you have to pay a visit the web and on internet I
found this web page as a best web site for most recent updates.


my blog - get cash for surveys does it work

Here is my webpage; web site ()

This piece of writing is actually a nice one it helps new web
visitors, who are wishing in favor of blogging.

John
Just a nobody trying to be somebody.

I am not an investment banker. All content on this blog are just merely my personal notes that I share with the public for entertainment only. Please take everything with a grain of salt and do your own research before making any decisions.

I accept no liability for the content of this blog, or for the consequences of any actions taken on the basis of the information provided.